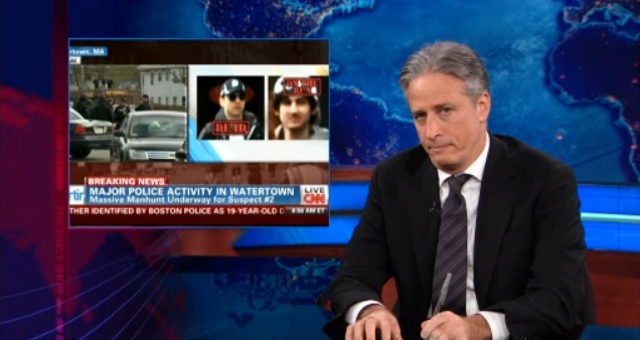 Video: During Boston Lockdown, CNN Reporter Says Scene Was Like “A Bomb Had Dropped Somewhere“

The Daily Show’s Jon Stewart can’t stop skewering CNN’s breathless coverage of the Boston Marathon bombing manhunt. During last night’s show, he took a long, sardonic look at the network’s reporting during the lockdown, which featured numerous correspondents standing on street corners wildly speculating about every siren, puff of smoke, and barking dog. Our favorite moment comes at the end, when Stewart shows a clip of correspondent Susan Candiotti describing the scene in Watertown as “eerie. It’s as though a bomb had dropped somewhere.”

This is even better than when I was a teenager, watching current events unfold on Rowan & Martin’s Laugh-In. The like of Walter Cronkite were too authoritatively sombre for such a frivolous day and age.